SSC CHSL Syllabus 2021 For Tier I, II, and Skill Test/ Typing Test are with ssc.nic.in. Acquisition of SSC Combined Higher Secondary Level Exam Syllabus 2021 and SSC CHSL Exam Pattern is fundamental to the Candidates. Everyone shall start knowledge acquisition only with SSC CHSL Syllabus 2021 first and then stand that with practicing SSC CHSL Previous Question Papers. Candidate if do any over preparation without following the Basic Fundamentals, Formulas, Subjects specified with the SSC CHSL Exam Pattern 2021 may not proportionate the Marks requirement.

Any Candidate just before implementing the preparation with SSC CHSL Exam Syllabus 2021, Look at SSC CHSL Exam Pattern 2021 given at ssc.nic.in. Because SSC Combined Higher Secondary Level Exam Pattern defines the Exam Paper model in such a way that Number of individual subject Questions and it Marks with time duration. For Every Question in the Tier 1 Exam, there are 2 Marks. In the same way, for every wrong answer, 0.5 marks reduced from the Candidate scored marks. So, after looking at all these conditions, prepare a plan to finish the SSC CHSL Syllabus 2021. SSC Define the SSC CHSL Exam Question Paper only with General Subjects. If the Candidate maintains in-depth knowledge and good skills on SSC Combined Higher Secondary Level Examination Syllabus 2021, for them it’s an easy task to finish Tier I, II, III rounds in a simple method. 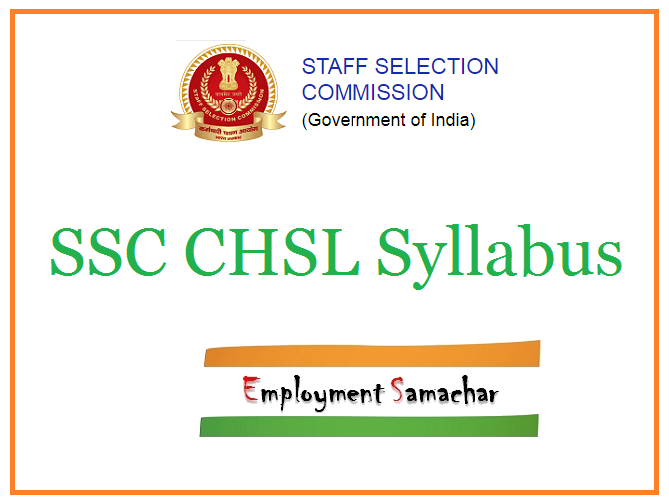 General Intelligence, English, Quantitative Aptitude, General Awareness are the only Topics with SSC CHSL Examination Syllabus 2021 decide the question paper appearance. Only MCQ Type Questions were dispersed in the exam. So, general preparation of SSC CHSL Exam Syllabus 2021 and logical thinking in answering a question are the major skills required for a Candidate to answer the questions in the exam. According to the Candidate feasibility, the difficulty of the exam asking question change. So, learn the Staff Selection Commission CHSL Syllabus 2021 first and then make a preparation schedule for revising the entire Syllabus.

Tier I, II, III Staff Selection Commission CHSL Exam Pattern 2021 from www.employmentsamachar.in known to the Candidate. Part I is an objective type test with 100 Questions and 200 Marks with 1 Hour time duration. Tier-II is a descriptive type test that contains Letter/ Essay writing for 100 Marks. Tier-II Exam Duration is also 1 Hour. Tier-III is a Skill Type Test and is of qualifying in nature.